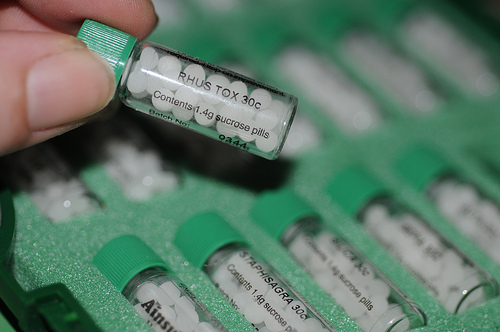 Thanks to Andy Lewis of the excellent Le Canard Noir who flagged this pharmacist opportunity: The Royal London Hospital for Integrated Medicine is hiring a pharmacist.  Normally pharmacist positions don’t justify blog posts – but this is a unique pharmacy. Until  recently, this was the Royal London Homeopathic Hospital. Yes, the United Kingdom’s National Health Service (NHS) funds homeopathy and homeopathic hospitals, yet it changed the name of the hospital in 2010, possibly because the idea of a publicly-funded homeopathic hospital was becoming untenable. Now it’s an “integrated” hospital; “integrative” being a preferred term for alternative medicine these days.

So what does the position entail? The job description is posted. You must be a fully trained pharmacist with a minimum of 10 years of experience. You are to deliver clinical pharmacy services.  And if you have some sort of integrated medicine training, it seems that the NHS wants that too, whatever it may be. See the job description (click to enlarge) for a candid comment about the qualifications:

So what does a pharmacist in a integrated pharmacy do? Why you will dispense indistinguishable sugar pills, of course. Homeopathy is an elaborate placebo system, where the products contain no active ingredients. I’ve described it many, many times, but I’ve never shown this excellent clip from Richard Dawkins, which sums up the mathematical impossibility:

There’s been considerable public discussion in the United Kingdom on the merits of homeopathy, brought into the public eye by a parliamentary science and technology inquiry into the practice, which ultimately made recommendations to end the provision of homeopathy on the NHS. The pharmacist’s role has been discussed, too, particularly the responsibility of pharmacies that choose to sell these products. It has stimulated discussion within the profession, and I’ve previously discussed the Chemist and Druggist poll on the ethics of selling homeopathy. Here’s what Professor Edzard Ernst said about the appropriateness[PDF] :

A C30 potency of a homeopathic remedy is so dilute that a pill would need to have roughly the diameter of the distance between the Earth and the Sun (1.48 x 10^11 metres) to contain a single molecule of active substance. The totality of the around 200 clinical trials of homeopathy fails to show that homeopathic remedies differ from placebos. Thus homeopathy is biologically implausible and clinically disproven. According to the General Pharmaceutical Council’s (GPhC) standards of conduct, ethics and performance, UK pharmacists must “be honest and trustworthy”. In particular, they “must explain the options available to patients and the public, including the risks and benefits, to help them make informed decisions [and] make sure the information [they] give is impartial, relevant and up to date”.

This leaves UK pharmacists essentially only two choices. They can sell homeopathic products and violate their own ethical standards, or they comply with their ethical code by being honest and providing the relevant information to their customers. The latter would mean telling them that the remedy contains no active material and has no effects. In this case, very few customers would buy the product.

The code makes it clear that patients’ safety is paramount. Selling products that are not demonstrably effective gives them undue credence. This can seriously jeopardise patients’ safety. Consumers will think that, as these products are for sale in pharmacies, they are evidence-based. Thus they may use them for treating serious conditions which obviously would do harm.

In conclusion, the sale in pharmacies of homeopathic remedies – and other alternative treatments that are unproven or disproven – is unethical. The GPhC’s standards of conduct could hardly be clearer when stating that “your conduct will be judged against the standards and failure to comply could put your registration at risk”.

So do General Pharmaceutical Council’s standards apply to pharmacists in the Royal London Hospital for Integrated Medicine? Absolutely. The  job description makes this quite clear:

4.    Ensures that all pharmacy patient services are delivered in accordance with the Royal Pharmaceutical Society of Great Britain Code of Ethics and in line with General Pharmaceutical Council regulations.

In fact, the same Chemist and Druggist article included a statement from the General Pharmaceutical Council:

We would advise pharmacists who are approached by customers enquiring about homeopathic preparations to take the opportunity to talk to the patient about their health issues to establish any underlying problems which may need referral, and to assist patients in making an informed decision by providing necessary and relevant information, particularly regarding the lack of clinical evidence to support the efficacy of the homeopathic preparation. We would also recommend that homeopathic preparations are only sold if they are being used for a minor or self-limiting condition, and never to treat or prevent a serious condition. Naturally the pharmacist should only supply a product where they are satisfied that it is safe and a preparation that has been sourced from a reputable supplier. For this specific scenario it would be worth exploring the reasons behind the customer’s aversion to ‘drug’ treatments to discuss why there is a ‘distrust’ of conventional medicines. [emphasis added]

In light of what is know about homeopathy, and what regulators say about the practice, it’s baffling that this type of pharmacy position even exists. Yet the hospital, and the role, appear to follow modern medical standards. The pharmacist job description looks like most others: following legislation & regulations, keeping clear policies & procedures, recruitment, retention, managing staff performance, etc. But pharmacists dispensing homeopathy aren’t providing any medicine – they’re just going through the motions of dispensing. It resembles a cargo cult.

The term cargo cult is a metaphor for the act of imitating an activity, while lacking insight into the underlying principles. Its roots trace back to World War II battles between Japan and the USA in the Pacific islands. Soldiers met islanders who had never seen technology like airplanes. Soldiers also brought food, clothing, and other products. But when the war ended, the soldiers disappeared. On some islands, cults emerged among the islanders which attempted to bring troops (and “cargo”) back through rituals like recreating planes and runways. The term cargo cult medicine was first popularized by Richard Feynman in a 1974 Caltech graduation address when he drew a parallel with practices that have the appearance of medicine but don’t  follow scientific principles. Homeopathy is cargo cult medicine: Its core tenets (like cures like, dilution increases effect) are fundamentally unsound. Physical laws and experimental evidence show it provide no objective effects. You can licence homeopaths, package homeopathy up in medicinal-looking packaging, and have accredited pharmacists label and dispense from a modern-looking pharmacy, but that doesn’t change the fact that the products are inert. The result is the Royal London Hospital for Integrated Medicine is a cargo cult pharmacy. Here’s a tentative definition:

Cargo cult pharmacy means to follow the accepted general principles of the pharmacy profession, but to engage in practices which lack essential components of genuine science. Cargo cult pharmacists disregard the need for robust evidence to support their recommendations and advice, and fail to critically appraise the products that they sell. Cargo cult pharmacies may use scientific-sounding phrases to give their products and services the trappings of a science-based practice. Terms like “integrative”, “holistic” and “personalized” may be used used in ways to give a scientific veneer to products and services that lack good evidence to support their use.

Can a pharmacist meet ethical and professional obligations while working in a pharmacy that dispenses homeopathy as if it were real medicine?  One of the stated requirements for this position notes that  services must be “delivered in a manner consistent with the UCLH Service Commitment ‘Putting Patients First'”. Pharmacists mindful of their responsibilities to the patient can truly “Put Patients First” by refusing to work at the Royal London Hospital for Integrated Medicine.

Photo from flickr user incurable_hippie used under a CC licence.