The holidays are upon us, and it’s traditionally the time of year when celebrate our good fortune, and pause to give thanks. Exchanging gifts is a big part of of the holidays, and it can sometimes be challenging to find something meaningful, that the recipient will appreciate.  Chocolates, toys, and gifts sometime become our “go-to” gift options. These things are nice in their own way, but I’d like to suggest something that not only reflects your good taste, but also your science advocacy.  It’s a gift that will also make a demonstrable impact on the lives of others. This holiday season, consider giving the gift of vaccines.

UNICEF, the world’s leading humanitarian and development agency, publishes a Gift of Life catalog each year. The catalog allows you to directly purchase products and services that UNICEF will use to improve the lives of children worldwide.  Gifts range from school supplies to malaria nets. All are worthwhile. But it’s the vaccines that caught my eye.

Vaccines are astonishingly effective at preventing illness, suffering and death from infectious disease. With the exception of clean water, no other health intervention has saved so many lives: More than 20 million lives in the past 25 years have been saved because of vaccines. More than 100 million infants are now immunized against the most common preventable childhood illnesses each year, saving more than 2.5 million young lives each year. Astonishingly, UNICEF is the world’s largest vaccine provider: they provided 2.6 billion doses of vaccines to children in 8 countries in the span of one year.

It’s the remarkable success of vaccines that’s contributing (in part) to anti-vaccine sentiment in the developed world. While reasons for rejecting routine vaccinations can vary, the fact that many illnesses have disappeared has led some to question the need for continued immunization. In some cases, sentiment like this had led to a loss of group (herd) immunity, and diseases have reappeared. And they can easily return via travel, with a carrier bringing an infection from an area where it’s not controlled.  So purchasing vaccines for others will not only save lives elsewhere, it could benefit you and your family, even if you’re thousands of miles away.

There are three vaccines you can purchase from UNICEF.

You Can Help Eradicate Polio From the Earth 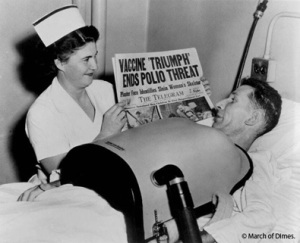 Polio is a viral illness that can infect the nervous system. If you’re under 50, you’ve never seen it. But ask your parents or grandparents about it. Polio epidemics used to sweep across Canada, closing schools, churches, playground and other public areas. It would paralyze about 1% of children, sometimes putting them in an iron lung just to stay alive. The Salk polio vaccine was introduced in 1955, leading to a dramatic drop in paralytic polio cases. Polio was eliminated in Canada by the 1960’s.

The complete eradication of polio from the earth is the goal, and after over 20 years, victory is possible. The project started in 1988. It’s the world’s largest public health project, involving 20 million volunteers. So far, polio has dropped 99%, and some 5 million children have been spared its effects. Polio remains endemic in only four countries worldwide: Nigeria, Pakistan, India, and Afghanistan, with scattered cases still appearing across 20 African countries.

You can vaccinate 228 children against polio, and contribute to its worldwide eradication, for just $45. (Americans, follow this link)

Eliminating the Scourge of Measles

Measles (rubeola) is a highly contagious viral infection that can attack the immune system. Mild complications are not uncommon, and permanent brain damage and even death can result, particularly in areas of the world without access to good health care. Worldwide, measles causes tremendous misery: 30 million children each year are infected, and almost 350,000 die, usually from complications related to pneumonia, diarrhea and malnutrition. Survivors of measles are often left with life-long disabilities, such as blindness, deafness or brain damage.

Fortunately, there’s an excellent, effective measles vaccine. UNICEF has vaccinated nearly 700 million children against measles. They estimate this has prevented 4.3 million deaths in just ten years. Amazingly, mortality due to measles dropped 78% between 2000 and 2009, due to UNICEF’s worldwide vaccination programs.

Measles elimination from the world should be possible as there is no non-human reservoir or source of infection. But until it’s eliminated worldwide, routine vaccination will be necessary even in countries like Canada, as its transmission is just a plane flight away from areas where it’s endemic in the population – and not just the third world. How about England? Unbelievably, measles is endemic in England where the Andrew Wakefield MMR-Autism manufactroversy drove immunization rates low enough for the disease to reappear.

Take action to support public health and a world free of measles by vaccinating 105 children against measles for $30. (Americans, follow this link)

Saving Newborns from Tetanus for Pennies

Tetanus is an acute and often fatal disease caused by an extremely potent neurotoxin produced by the bacteria Clostridium tetani, a naturally occurring bacteria in the environment that enters through open wounds – often the umbilicus. Neonatal tetanus is common in many developing countries and causes a substantial number (215,000) of neonatal deaths – fatality rates can reach 70 to 100%. There are 46 countries where tetanus has not been eliminated. Canada is fortunate-it’s largely eliminated, due to vaccination. UNICEF is working to bring this protection to the rest of the world.

The tetanus vaccine costs just $0.05 per dose. A $40 donation will vaccinate 769 newborns against this disease. (Americans, follow this link)

I’ve only highlighted a few the gifts of health that UNICEF is offering. You can also buy rehydration salts, vaccine carriers, baby scales, anti-infection tablets, and many other products. With your purchase, you have the option of receiving a card in the mail, or sending an ecard to a recipient of your choice. UNICEF is an efficient charity, with 82% of donations going directly to to programs. (The Charity Navigator evaluation of the United States Fund for UNICEF also give it an excellent rating.) With your modest donation, you can make a meaningful difference to the lives of others, help eliminate diseases from the earth, and  demonstrate your science advocacy – all in one gift. And who wouldn’t appreciate a gift like that?

One thought on “Seasonal Science Advocacy With Gifts That Save Lives”